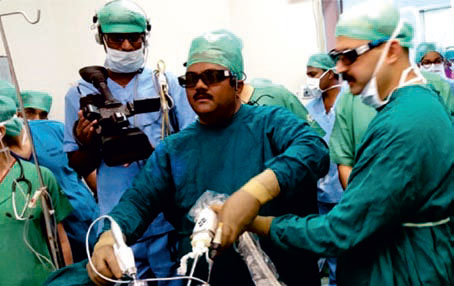 It is a matter of pride to KCC that an Innovative surgical technique for Cancer of the Esophagus was developed for the first time at Kolhapur Cancer Centre in 2007.

This technique was innovated by our Chief Surgeon & MD Dr. Suraj Pawar which is a Minimally Invasive Surgery for Cancer Esophagus in Semi-prone position that has made the difficult surgery simpler and with less complications reducing the post-operative pain & facilitating early recovery for the patient.

This technique was presented at the “Best of the Videos” session at the 12th World Congress of SAGES (Society of American Gastroenterologists & Endoscopic Surgeons) at Washington DC in 2010. The American Board of Surgeons has recognized this technique & it has been incorporated into their academic programme as well.